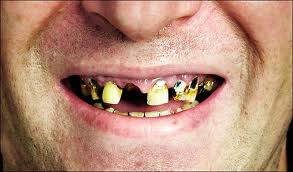 Whichever way round it is it’s clear that based on new research people with bad teeth admit that it has had a very negative impact on their lives. Bad teeth, it would seem, have a directly negative impact on people’s lives, which may be one reason why they don’t smile as much as people with a good set of clean, healthy white teeth.

The research, carried out by Oasis Dental Care, reveals that 70% of those people with bad teeth admit to it affecting their lives in a measurably negative way. That works out at 9.7 million people in the UK alone feeling that their teeth aren’t just letting them down, they’re letting their whole lives down. Of the adult population in the UK it is estimated that around 14 million people admit to having bad teeth, which means that we could be looking around a third of the entire adult population of this country having their lives seriously impacted simply because of their teeth.

It is a very sad state of affairs, especially when we realise just how many affordable treatments there are available now to people with bad teeth, or missing teeth. Not only are there more means for people to look after their teeth themselves, with more effective toothpastes, toothbrushes, mouthwashes and other such treatments, but the world of dentistry has seen a massive change over the last decade or two, with both more treatments, and more affordable treatments available for everyone.

The Self Serving Problem Of Bad Teeth

Around 39% of adults in the UK who admit to having bad teeth also admit that they actively trying to either hide their smile, or they entirely avoid smiling altogether. There are two problems with this.

First of all, people tend to make assumptions about each other based upon the way they look, and this isn’t just to do with their physical appearance, such as their teeth, but their body language and whole attitude. This means that people with bad teeth, and who try to avoid smiling or laughing are giving a negative impression to other people.

Of course it is effectively a self serving problem, since people with bad teeth tend to avoid smiling, which in turn gives people a negative impression of them, which means that other people don’t tend to engage positively, giving cause for the person with bad teeth to assume that is their teeth which are causing the problem, when in fact it may well be simply the fact that they’re just not smiling.

The other thing is that the actual act of smiling, at least smiling naturally, helps us to feel good. Research shows that people who smile and laugh feel more positive, and are therefore more inclined to smile and laugh. It’s another self-serving characteristic.

So we can conclude that if people with bad teeth, numbering many millions in this country alone, took advantage of the many affordable dental treatments available, from veneers to teeth whitening, invisible fillings to crowns and bridges, they would be able to smile more, engage more positively with other people, and enjoy a much more positive quality of life.

It’s not much to ask, and in fact it’s only what we should all expect. At least we can say that with around 14 million people in the UK of adult age admitting to having bad teeth, the world of dentistry certainly has enough work to be getting on with, and a good many more smiles to help put on people’s faces.